At 24 years old, Mari Huws successfully ascended and descended Wales highest 100 mountains! We caught up with the passionate Welsh hiker to learn about her, her experiences and Wales’ highest mountains.

Conquering Wales’ highest 100 mountains, that is quite a feat! What made you want to do this challange?

It was Autumn, 2015, I was 23 years old and working for a charity in Tokyo. Being born and raised in North Wales, the mountains and wilderness has been a big part of my upbringing and days without seeing the mountains or the sea unsettles me. Every weekend I was travelling for hours out of the city to explore the highlands and coastline of Japan. By this time in my life, I had spent most of my adult life away from home (North West Wales), studying, travelling and working abroad. Returning to North Wales at the end of 2015, I was jobless and my future unplanned. The only certain thing was that I was going to be in Wales for most of 2016 – so without thinking too much about it, I set myself the challenge to hike the 100 highest mountains before the end of the year… and it took me to epic scenery in every possible weather!

What was the hardest mountain you ascended during the challenge?

The hardest mountain I ascended was Pen yr Ole Wen. Starting from Llyn Ogwen at four in the afternoon having been hiking since three in the morning. I had decided to attempt the 14 Peaks challenge, and managed to tick off 17 of the 100 in 16 and half hours. The foot of Pen yr Ola Wen is the final opportunity to give up before completing the Carneddau, a ridge of mountains that roll on for 13 miles from Ogwen to Abergwyngregin. My legs felt heavy, I remember using the tactic that my mam used with me when I was a child – to hike to ‘the next wall’ then to ‘that rock’, then to, ‘the edge of the fence’. It’s a psychological game, I knew my body could do it but my mind was starting to become lazy. Reaching the top of Pen yr Ole Wen on that sunny afternoon in May – I knew that that was going to be my first successful attempt at completing the 14 Peaks. I came off the mountains down to Bwlch y Ddeufan with my head torch on, slightly delirious but exhilarated!!

What was the biggest mental or physical challenge you endured?

We’re lucky in Wales because most mountains are connected by ridges and shallow passes. But there were a few, lonely, boring, heather covered peaks that just needed to be done. The biggest challenge I faced were the days that I can only describe as ‘tick’ days, where I would park at the foot of a mountain, hike the quickest way up and take the same route down. Tick. Done. (e.g Pen y Bryn Fforchog / Esgeiriau Gwynion / Carnedd y Filiast). There was never a really boring day, but I did spend hours in the mist and rain trying to find my way through bogs on path-less peaks. I was also completing the challenge when the days we’re short so rain, snow, mist and wind was no stranger!

How did you stay motivated and on track to complete the challenge?

I’m not very good at being bored and the truth is, I was unemployed for 7 months in 2016, and lived the other 5 months on Bardsey Island… where the highest peak is less than 150 meters…! The months I spent at home I freelanced a bit and developed a few projects (I’m a doc film-maker) but my weeks we’re planned around the best days for hiking. I’d try to spend the best days of the week in the mountains and the others developing projects/ looking for work. It was amazing to have this challenge to carry me through what could of been a year of feeling like a failure. Being 23/24, living at home, no job – instead it made me determined, gave me focus, and a sense of achievement with every peak I ticked off.

When did you begin and finish the 100 Wales peak challenge and how often did you go hiking?

I begun the challenge on the third of January 2016, and finished on the 18th of December 2016. I had worked the summer months on Bardsey, the remote Welsh Island so completed the challenge between January-May and October-December. There is something special about hiking in April, and November, and in the weekdays where the sun rays warm the snow and my footsteps were the first and the last the mountains had felt in the days. I definitely hiked on average once every week for 7 months, and those hikes more often than not reaching 2-4 peaks in a day.  I kept a blog, www.cantcymru.wordpress.com of evrey hike.

Did you learn anything about yourself? Or about Wales?

The challenge took me to new places and new landscapes. From the rugged peaks of Snowdonia that I knew well, to the rolling hills of Pumlumon and Brecon Beacons. I started to understand the geography of Wales better than I ever learnt in school, I saw it as patchwork. From Cadair Idris on a Monday to Rhiniog Fawr on the Thursday – I could see how the country merges together. Fields, rivers, forests, ancient and new roads, all coming together to create one Wales.  Looking back now, the days I spent in the mountains between October and December last year gave me the mind space to develop and think through the project that I was working on at the time- Bad Oil. A documentary project that took me into the last remaining parts of the Sumatran rainforest in Indonesia 6 months later. The body and soul of that project was thought through on the mountains of Wales!! www.badoil.co.uk

Did you need any specialist gear for this challenge?

One of the best things about falling in love with hiking is that once you’ve invested in a good pair of shoes, warm clothes and rain gear all you need is a map and a compass and you’re good to go. There were a few days that I needed my crampons and axe, but most of the days I only needed the basics. If you’re getting into hiking now, I recommend investing in good quality gear, they last for years and you can depend on them!

Words of inspiration to others?

Seize the day!! There has never been a day out in the mountains that I’ve regretted. Learn to read a map, take the harder routes and go to new places. Be outside and be grateful for every opportunity you get to.

The book that inspired my challenge wan 100 Cymru by Dafydd Andrews, (Y Lolfa). There is another great Welsh book, published last year called Copaon Cymru, 48 hikes in Wales, illustrated and filled with amazing photography and snippets of history alongside maps and routes. For weather, I always use Met Office Mountain Forecast and another good website for ground conditions is www.mwis.org.uk

What’s next for you?

Another thing that I love about living in Eryri is all the water. I swim all year round, in the sea and lakes, but this year I’ve decided to explore more of our lakes rather than opting for Llyn Padarn all the time. It’s already proven exhilarating, I swam in Llyn y Biswail, which is located under the summit of Cnicht during the first week of January… quite memorable! On a warmer note, me and my friend have our eyes on Mount Olympus, the highest mountain in Greece before the end of the year.

Never underestimate the power of your mind over physical ability.

Know of someone or something special in North Wales we should feature? Email us – northwalestagram@gmail.com 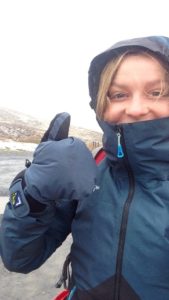 > For stunning photos, features, stories, news and an incredible community of almost 30,000 on Instagram follow us here: @NorthWalestagram 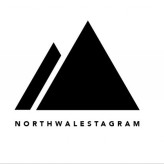